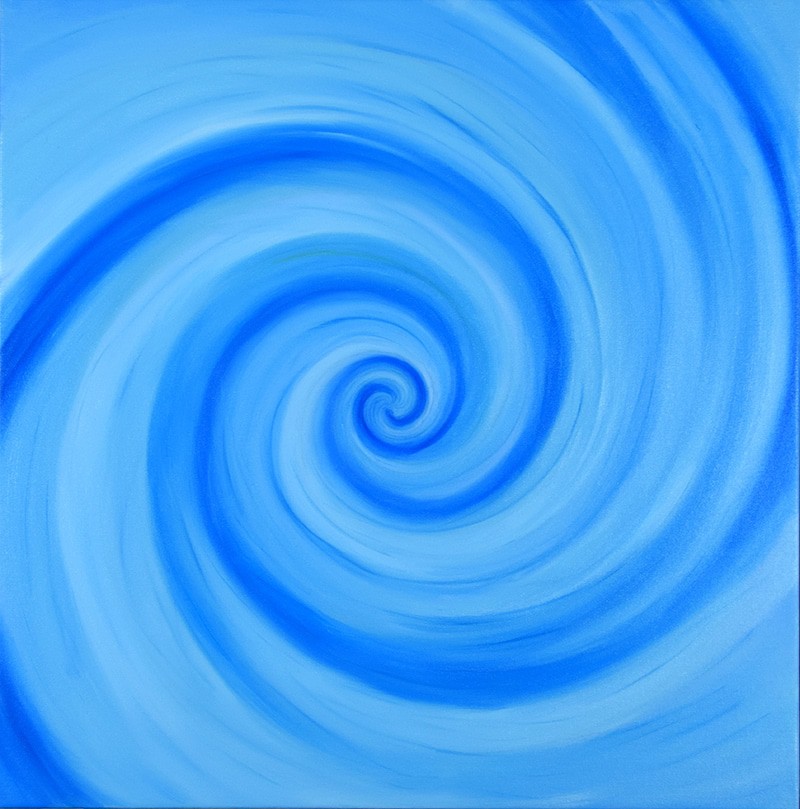 Back in February I posted a sketch of a 13-armed Fibonacci Spiral. That sketch was executed on canvas. That canvas hung around the studio for a few weeks before I snuck up on it with a palette of blues. I spread the paint (acrylic) around with a combination of gesture and tight control until I built a reasonable image of energy and movement emanating from the center, but I wasn’t done with it and it wasn’t done with me. So it hung out in the studio for a number of weeks while I worked on other things.

And then its patience wore thin. It started out as a barely audible whine. It moved to a noticeably silent screech. When I tried to sleep it invaded my dreams. When I entered the studio it demanded my gaze. I couldn’t come up with any excuses or reasons to leave town. I had started to paint in oils and I knew this one wanted some of that rich pigment. Then one night around 3 am, I couldn’t take it any longer. Purposefully I strode out to the studio. A super early bird sung through the cool night air escorting me to the altar of oils. Confidently squeezing out great globs of white and blue, deftly mixing and swirling an organized chaos of tones, I began to paint. A dragon and a werewolf guided my strokes. I knew blue. I sensed shape. I listened to line. My mind was allowed a bit part, a supporting role, but if it tried to take control, the dragon roared. If it raised its critical voice, the werewolf snarled.

Two hours later I go back to bed. I dream that I am in a healing or empowerment workshop with a small group of women. We are supposed to write down something that we like to do on white cardboard. Feeling snarky and not wanting to share too much of myself I write, “I like to take showers.” One by one we read what we wrote out loud while showing the card. When it’s my turn I hold up my card and start to read, but the words are not what I wrote. Shocked I read, “I like to be re-imagined.”

So I ask, please, re-imagine me. Re-imagine me as a painter of spirals.