Last week I was blessed with the opportunity to visit the Altavista Petroglyph Site in Nayarit, Mexico. Also known locally as “La Pila del Rey,” which could be translated as “The Basin of the King.” Note that basin carries a sense of fountain, spring or source.

Our tour guide, Maurizio, breezed past the signs explaining the images with a wave of his hand, “They don’t know what they’re talking about.” Dismissing the surprisingly Christian explanations for carvings created 300 years before Jesus, he delighted us with musings, stories and explanations based on his own reflections and local Huichol beliefs. To be clear, the rock engravings are believed to have been created by the Tecoxquines, an Aztec tribe, who were wiped out by disease in the 16th century. Today, the Huichol hold the site as sacred. Regrettably the budding journalist in me hasn’t quite bloomed and I didn’t take any notes. So the information here is related according to my memory and websites that are listed below.

Generally speaking geometric designs are quite common in rock art throughout the world. The extensive search for meaning commonly yields a connection to the cosmos, our own bodies, maps and directions. Most interestingly a contemporary opinion that has gained much ground since being suggested by David Lewis-Williams in his brilliant book, The Mind in the Cave, is that the images come from activity in the primary visual cortex. The intrinsically generated visual-noise patterns can be caused by isolation in a dark room, migraines, psychoactive drugs, deep meditation, intense sacred rituals or by simply rubbing your eyeballs.

I include some of Maurizio’s explanations in the captions, yet I want to stress he continually reminded us that no one knows, for sure, what’s true. So I’ll suggest let’s enjoy the mystery and take our time looking at the images. Let’s contemplate our own peculiar response. Perhaps sometime this weekend, even though the sun is shining and good weather is finally here, we’ll be seeking the truth alone in a dark room, rubbing our eyeballs. 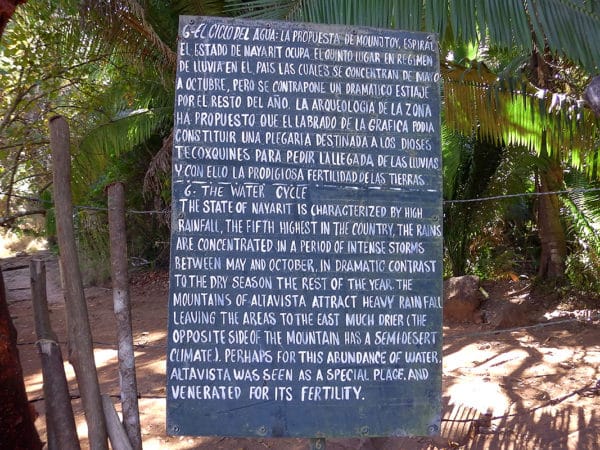 Welcome sign at the start of the trail to the Altavista Petroglyphs. 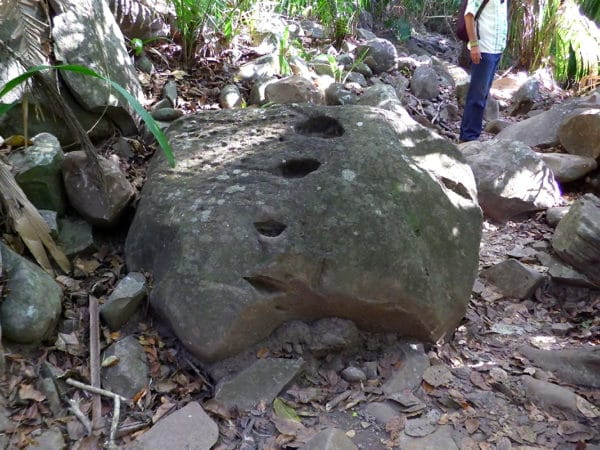 The four deep gashes in this large rock at the beginning of the trail symbolizes the four pools to be found in the stream at the end of trail. It also points the way to go. 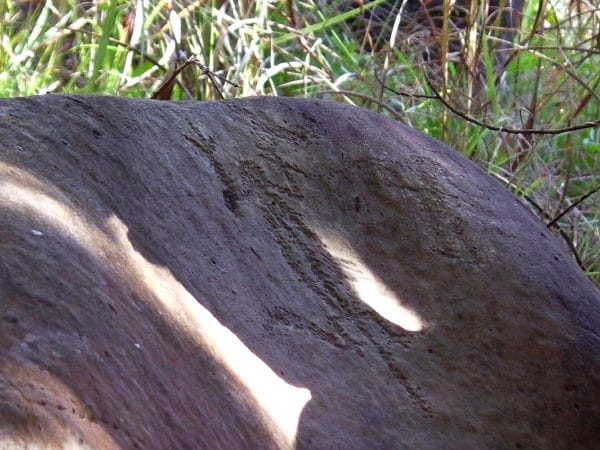 A lizard or lizard-like carving. 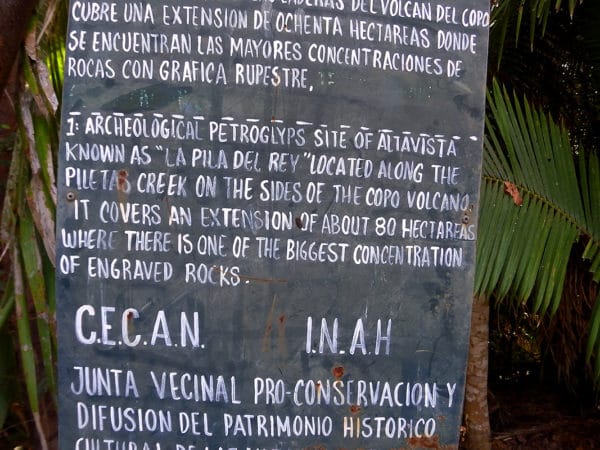 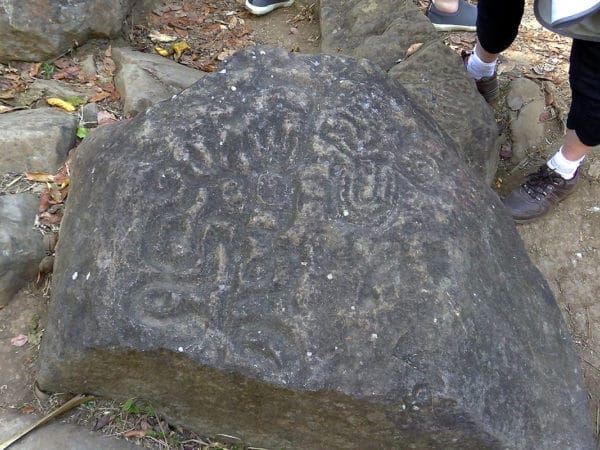 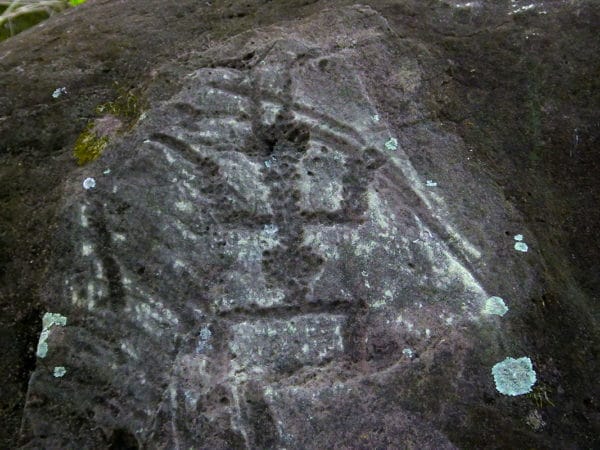 A person? A bug? An alien? Possibly an alien person bug being. 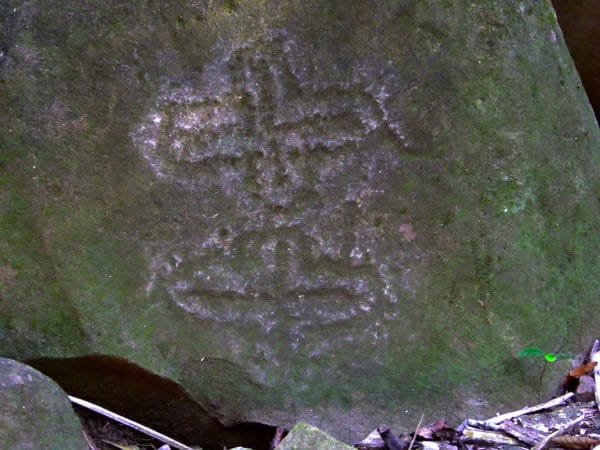 Ancient Mesoamericans believed the cross to represent the five sacred directions: four cardinal points and the center. The Equal Armed cross symbolizes truth according to the ancient Celts. 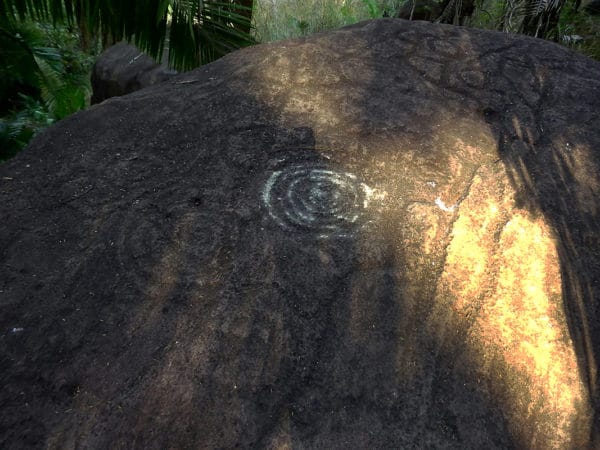 This image was made by holding my camera up and reaching out, I could not see what I was shooting. Maurizio said this could be a map. 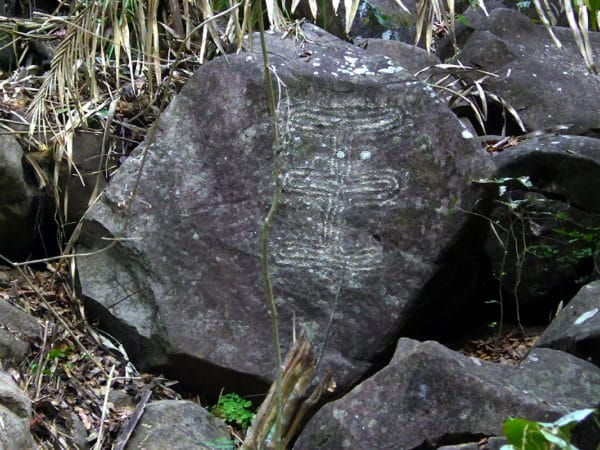 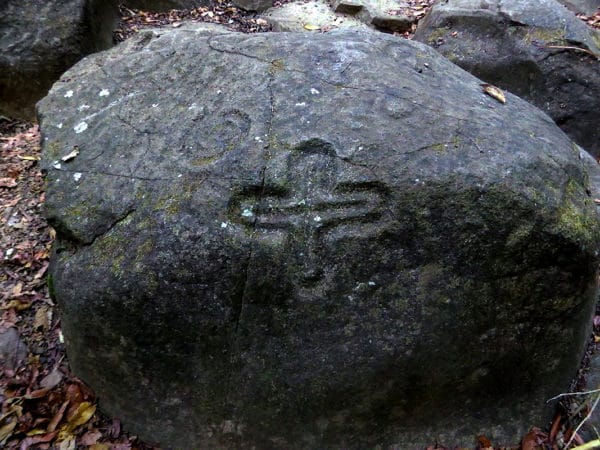 A deeply carved equal-armed cross. Note the spiral hoovering off to the left and be aware that I'll be devoting a series of posts to spirals starting soon. Please subscribe so you don't miss it. 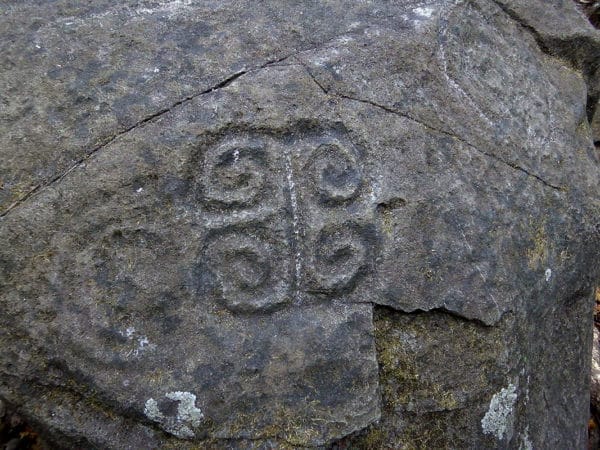 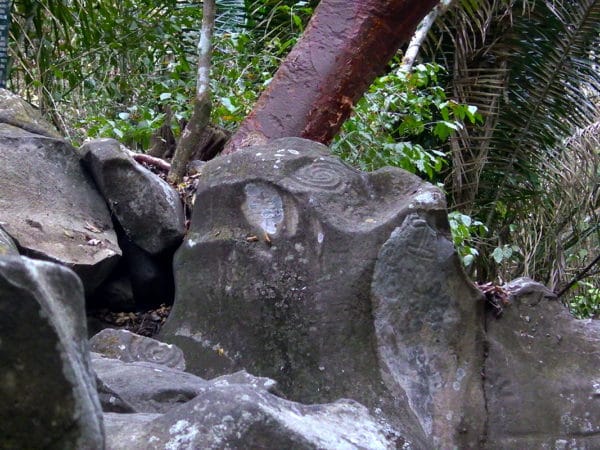 Spirals are one of the most common motifs of rock art worldwide. 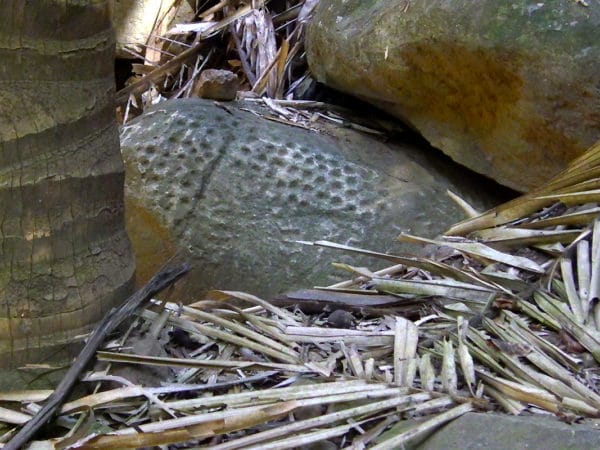 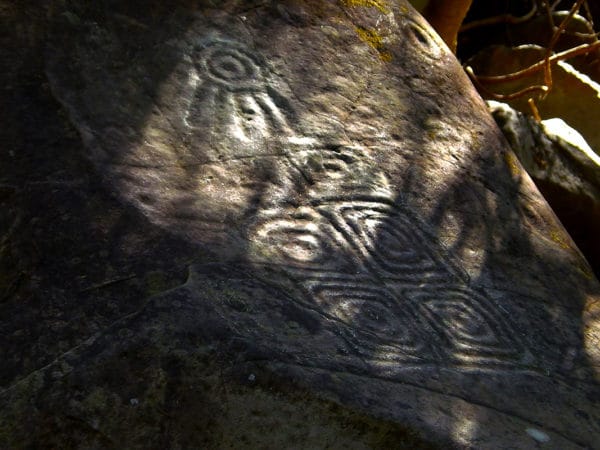 Maurizio explained that the concentric circles at the top are the sun, the lines emanating are the sun rays, the four concentric squares could be the pools of water at the end of the path or the four directions. 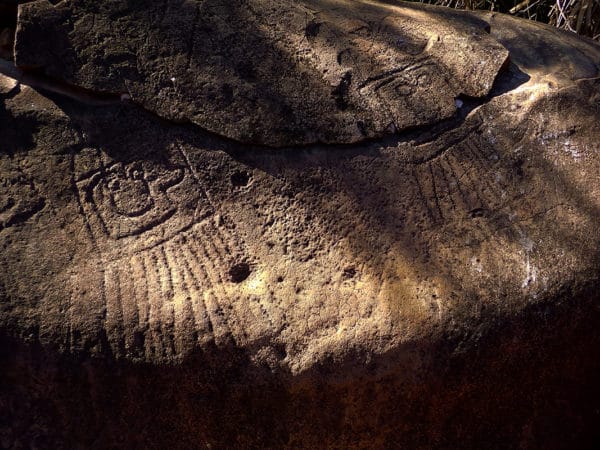 Faces with the rays of the sun beneath? 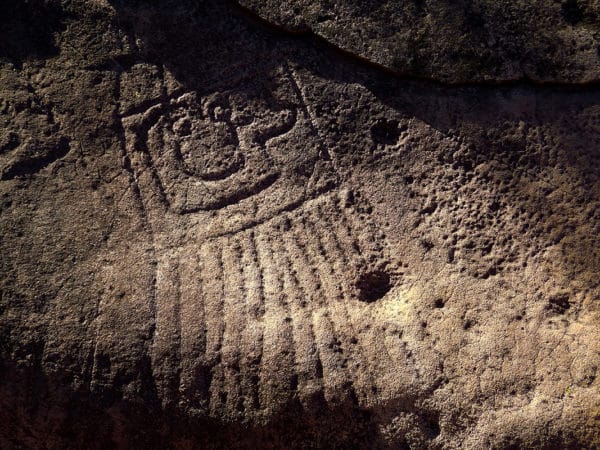 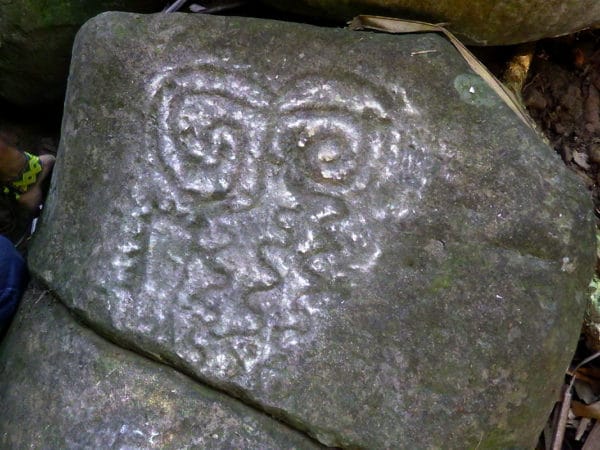 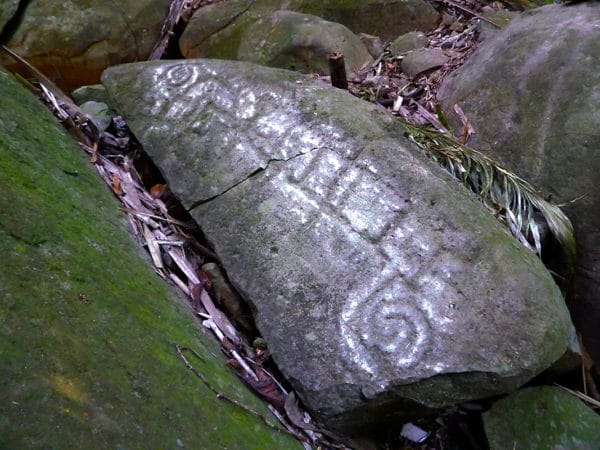 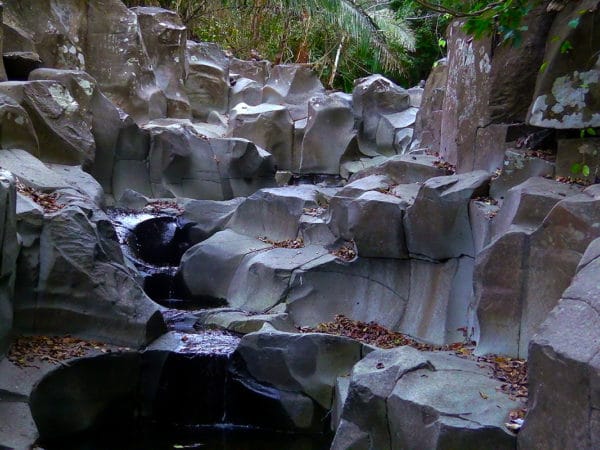 Three of the four pools at the end of the trail at Altavista.

Great article on ancient symbols in rock art from the Bradshaw Foundation:

Wikipedia lists some of those questionable christian connections here:

← How getting studded Bike Tires led me to Oil Paints.A Painter of Spirals →
Scroll To Top