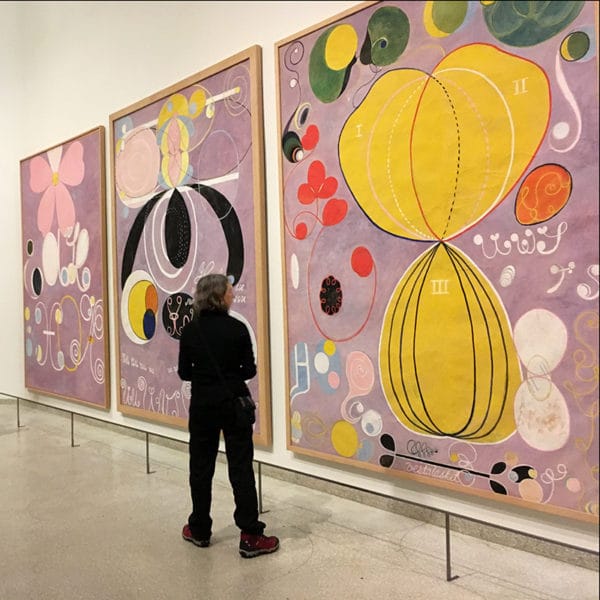 The Most Visited Exhibition in Guggenheim’s History.

I saw it. I flew to NYC to see "Paintings for the Future by Hilma af Klint" at the Guggenheim. On Saturday, April 20, last weekend of the show I cruised past the line brandishing my membership card and got in a full thirty minutes before the museum opened to the general public.

A general public that has had the opportunity to see the show for a full six months, three months longer than most Guggenheim shows. More than 600,000 visitors have seen the show, membership has increased 34% since the exhibition opened and more than 30,000 catalogues have been sold surpassing the previous record set by the 2009 catalogue Kandinsky.

Yeah that’s pretty cool. People like it. People seem to be inspired by it. People are buying the iPhone covers, the postcards and the refrigerator magnets. People are swooning over the shapes and colors, but when it comes to the deeper meaning of the work it seems most people are trying to avoid the truth.

The paintings are landscapes of the spirit world.

They depict the astral plane.

They represent reality, a supernal reality, yes, yet reality just the same.

Most people smile, snicker or sneer when I mention that af Klint was commissioned by a spirit to create these paintings. Many roll their eyes and explain to me somewhat haughtily “well that was her process.” Meaning that the paintings weren’t really channeled from a spirit. She simply imagined a connection to the spirit world in order to get herself into a creative mode.

Why do people scoff? I can think of two reasons:

They do not accept the existence of a “spirit word?”

They do not believe that we have the ability to connect with the spirit world.

Let the sadness of that sink in for a minute.

Imagine nothing exists beyond physical reality. Or if it does, we have no way of exploring it.

We have no way of seeing it, feeling it, sensing or painting it.

Imagine there is a world beyond our physical perceptions.

And we have many, many ways to experience it.

And Hilma af Klint did just that.

Can you feel wonder? And amazement?

Can you sense expanding possibilities?

Can you let the joy of that sink in for a while, maybe for your whole life?