Digging around my Irish roots, I found Celtic Key Patterns.

Celtic Key Patterns are described in my little Wooden Book as great space filling devices. Although I aspire to much more than filling space I decided to give key patterns a try. It’s not as easy as it looks. Ok, it doesn’t look easy. The first step is to make a circular grid. Then make a pattern that will fit the grid. I made my grid with 84 compass points, so I had to come up with a pattern whose smallest increment is a factor of 84. There are plenty of numbers to choose from but I wasn’t sure how to count the rhomboids in the grid. This is hard to explain so you may want to ask someone else, because I just keep trying until I get it. I use a combination of trial and error, math and ESP. I admit to a number of failed attempts. The first time my pattern matched up I exploded with joy.

There’s a feeling when it all fits together. It’s like magic.

So I jumped right in and drew a grid for a larger band. This time, smarter, I decided on 60 points round the circle. Then the smallest increment of any pattern could be 2, 3, 4, 5, 6. . . Many numbers factor into 60, so I’d have better luck creating a key pattern that works. Actually the one shown here was copied from the book. In fact I didn’t even draw it. My partner Giuliana did. I was so mesmerized drawing the evenly spaced arcs that I just kept making grids.

Here’s what I discovered.

Making the grids puts me into a meditative state. The repetition, the gentle arcs back and forth, the focus and intent helps me relax. I found myself arcing around the circle, minding my own business and sinking deeply into a trance. I lost sense of time. My muscles loosened. I forgot my name. I rode that wave until the grid completed itself and I set down my compass with three deep breaths.

Here’s what I think happened.

When drawing circular grids the mind has something to do that’s complicated enough to demand all its attention but repetitious enough to invoke tranquility. Like rocking a baby to sleep, drawing the gentle arcs lulled me into a state of bliss.

Thinking is what the mind does. It’s happy doing all that thinking. Its job is to think. So let it. Let it focus on something, something kinda complicated, but repetitious and a bit mundane, something like a circular grid. Try it. Like meditation it may not work the first time, but unlike meditation I bet it works the second.

I intentionally did not post all the pictures as the arcs are added and the form emerges. It’s rather unexpected the way it comes together and somewhat delightful when you don’t know what’s going to happen. So give it a try. All you need is a compass and paper. I used a piece 12” x 12”. I will post a detailed video in two weeks, along with how to design the key patterns.

If you want to make a key pattern like this. 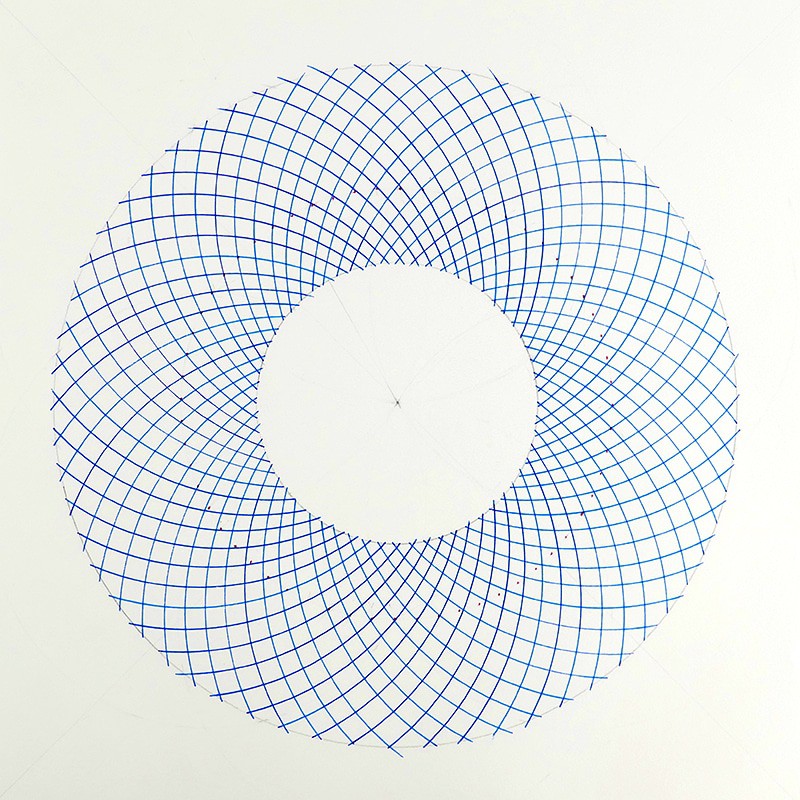 You will need to start with a grid like this. 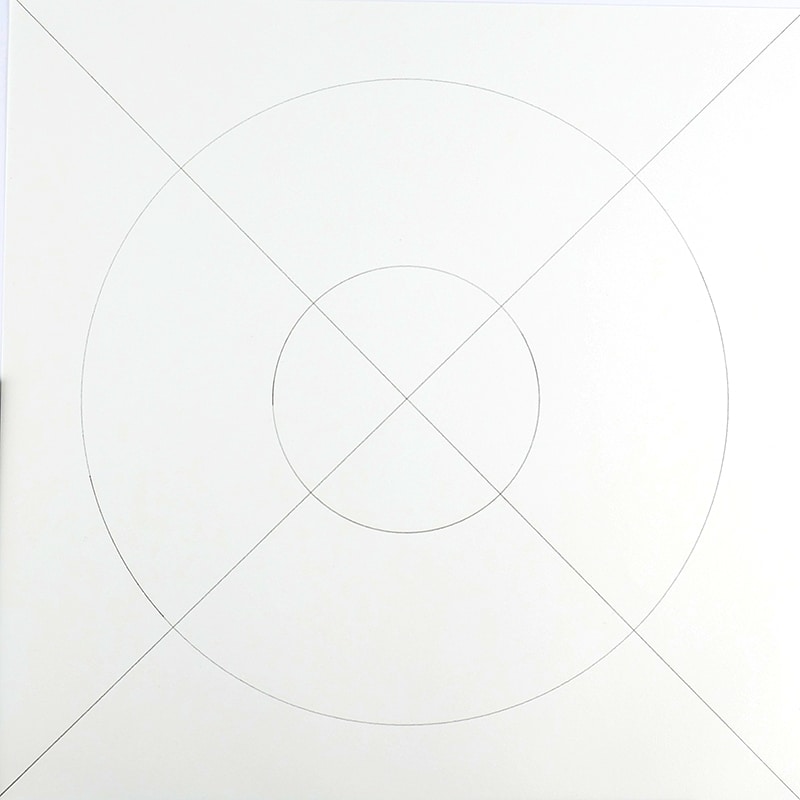 Find the center (crossing lines corner to corner). Draw two circles, one large one small. This sets the width of the band. 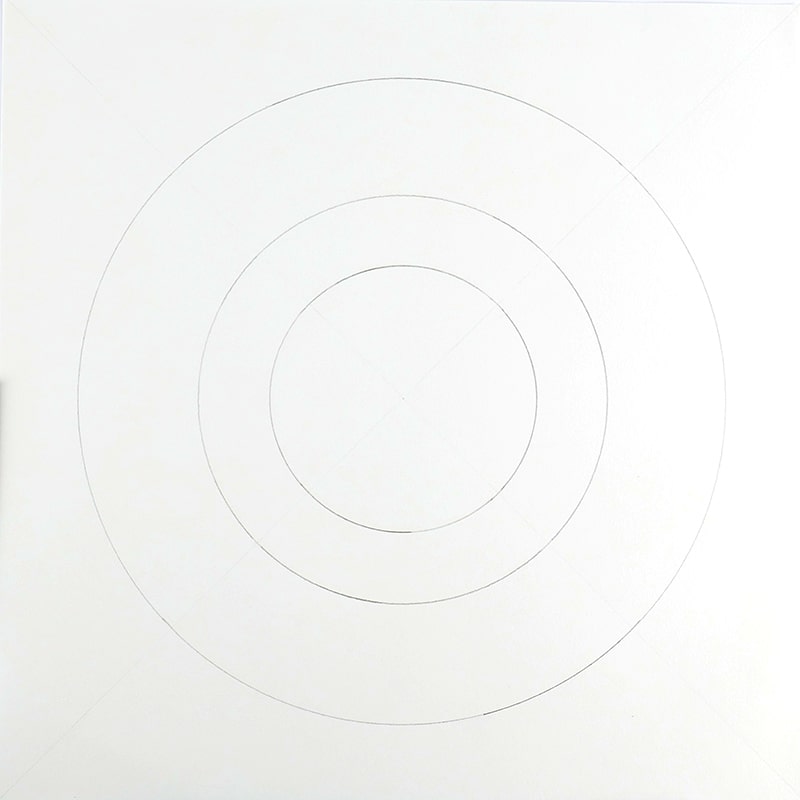 Make a third circle in the middle. This middle circle is where we will set the compass points. Erase the centering lines. 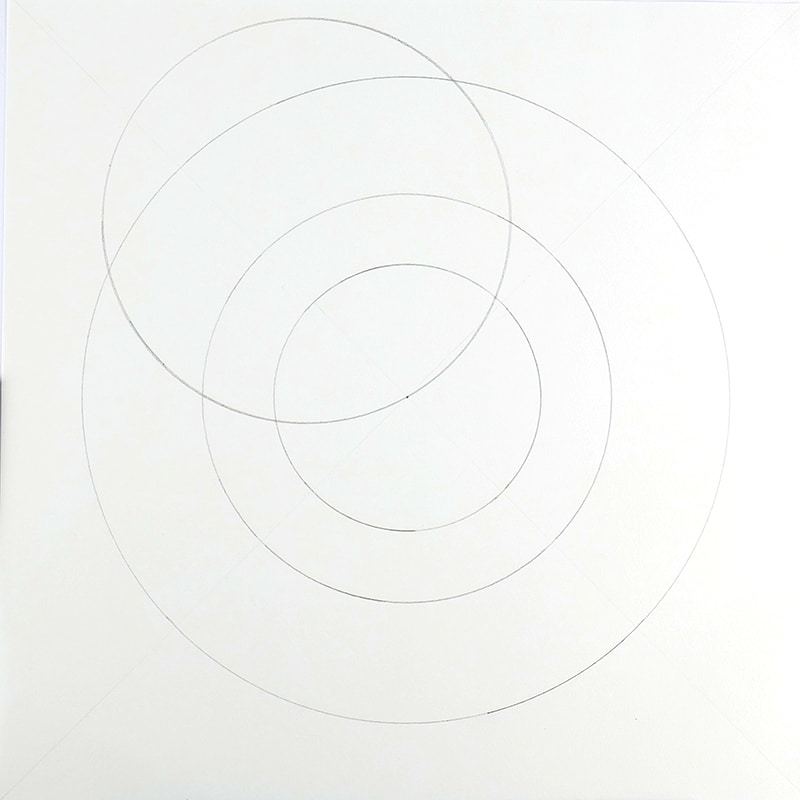 Keep compass at same radius as center circle and draw another circle using any point on the middle circle as the center point. 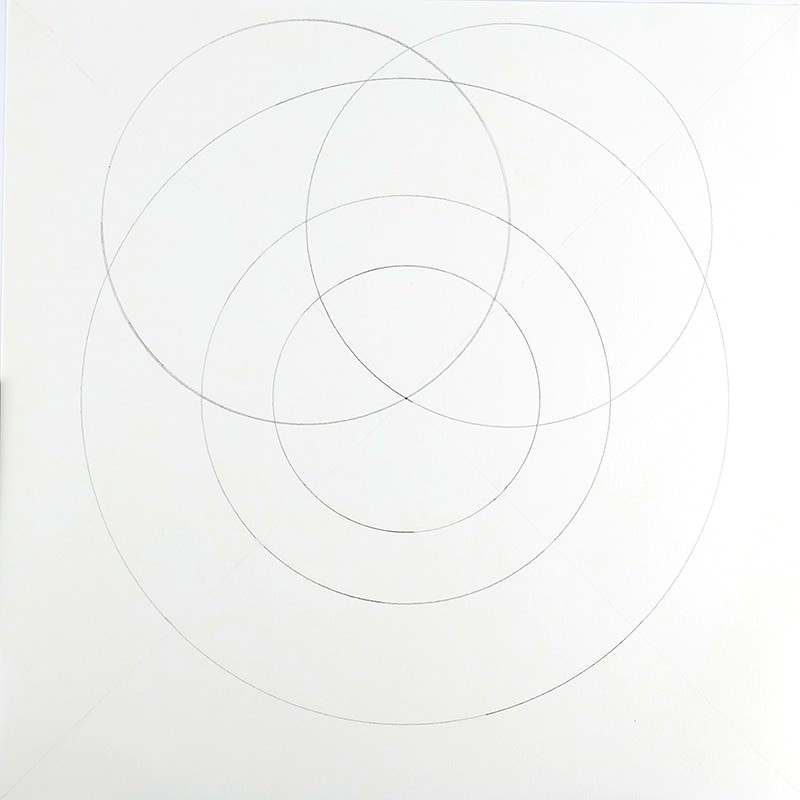 Draw another circle, same radius. For the center use either point where the last circle crosses the middle circle. 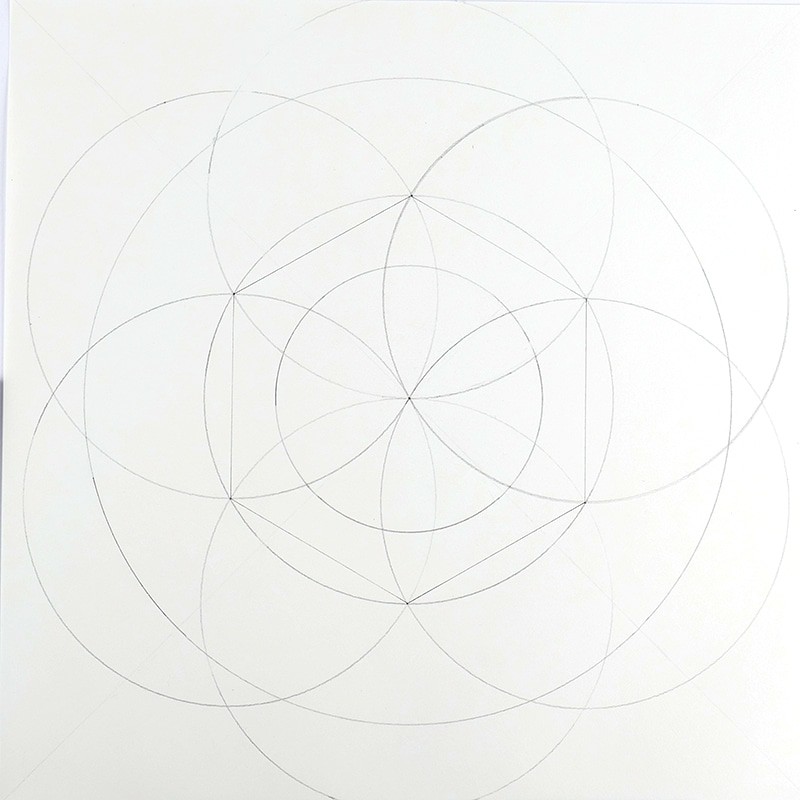 Do this 4 more times. Draw straight lines to connect points to make hexagon. 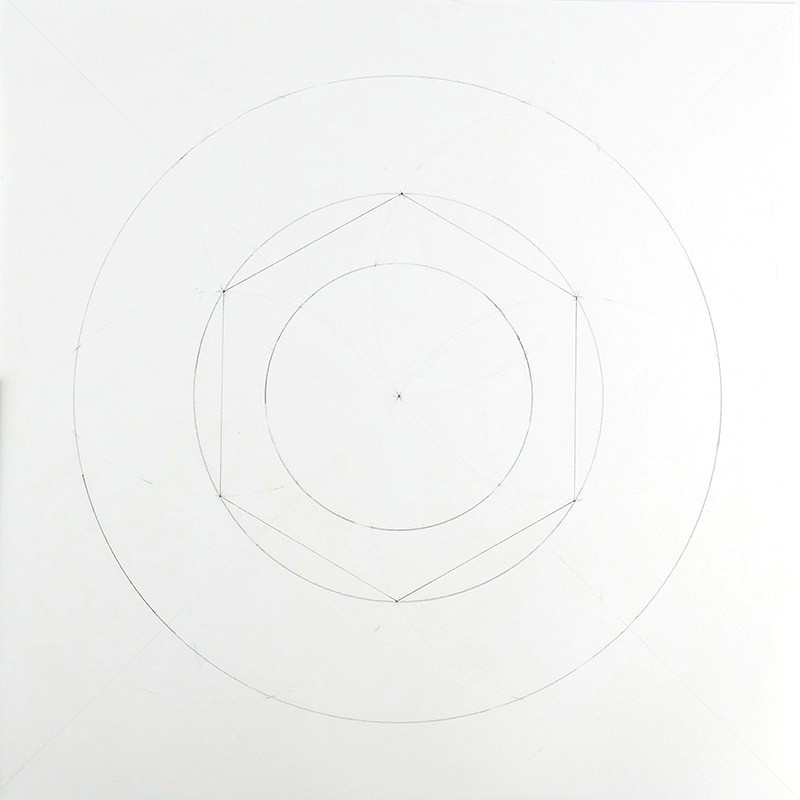 Erase unnecessary lines. The hexagon is going to help find the compass points. 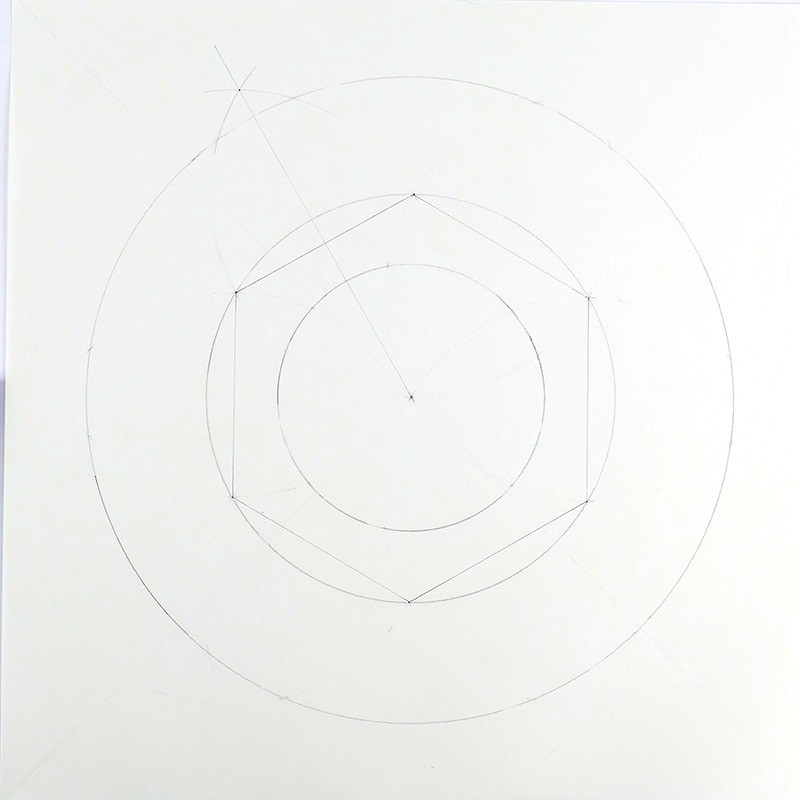 Divide one side of hexagram into two equal parts: Set compass radius at width of line. With the point on one end of the line make an arc. Do the same with the point on the other end fo the line. 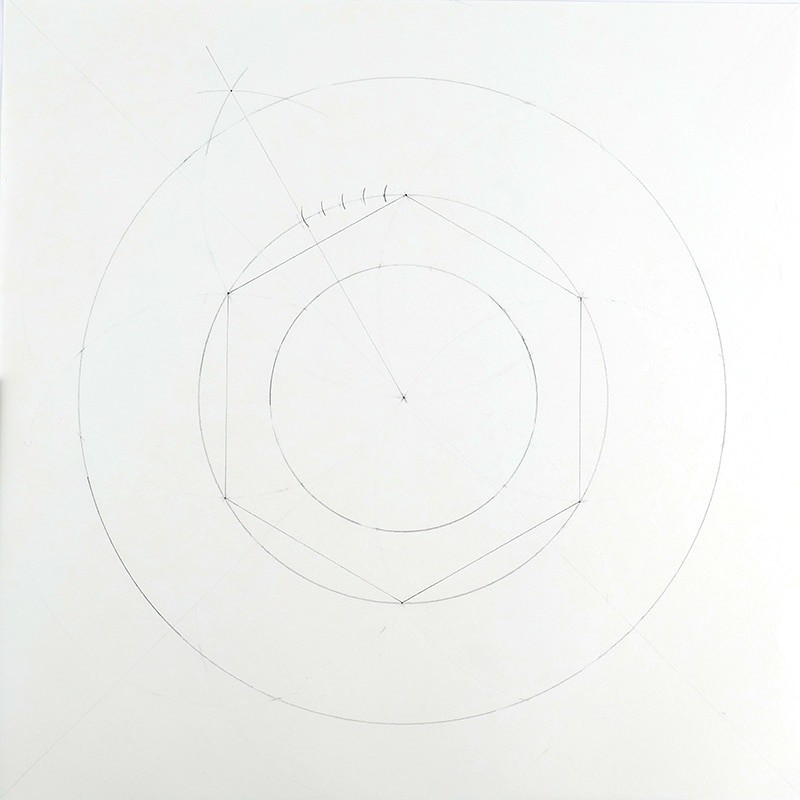 Now this is the tricky part. Eyeball the radius you'll need to make 5 equally spaced arcs that will exactly fill half of the line. Keep trying and erasing until you get it. It doesn't have to be super precise, just pretty close. 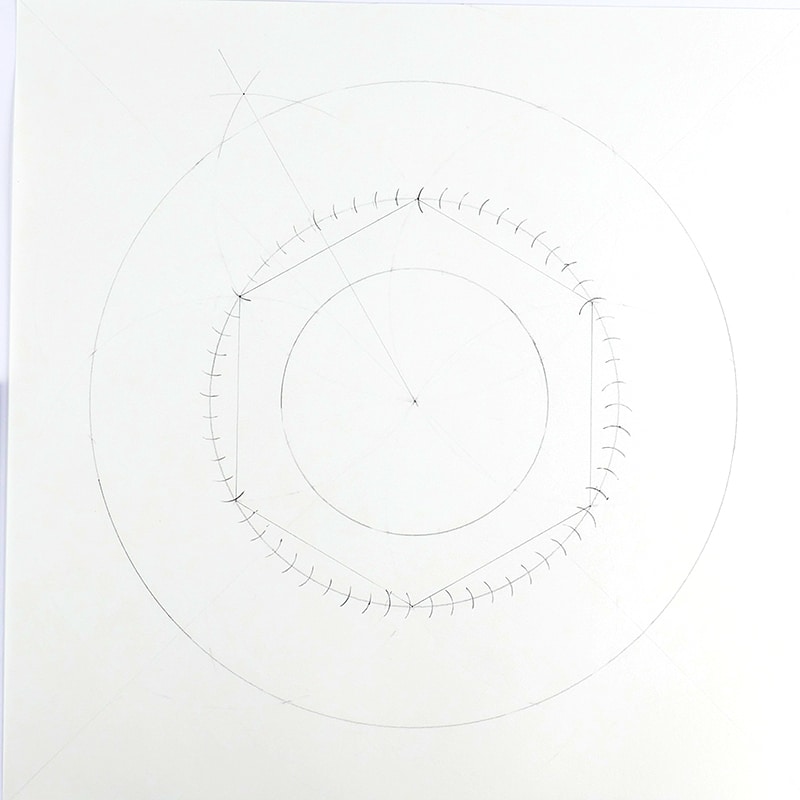 Arc your way around the circle making sure that there are 10 arcs between all hexagram points. If you get off, just shift the compass point a little to make up for it. I don't recommend changing the radius on the compass. 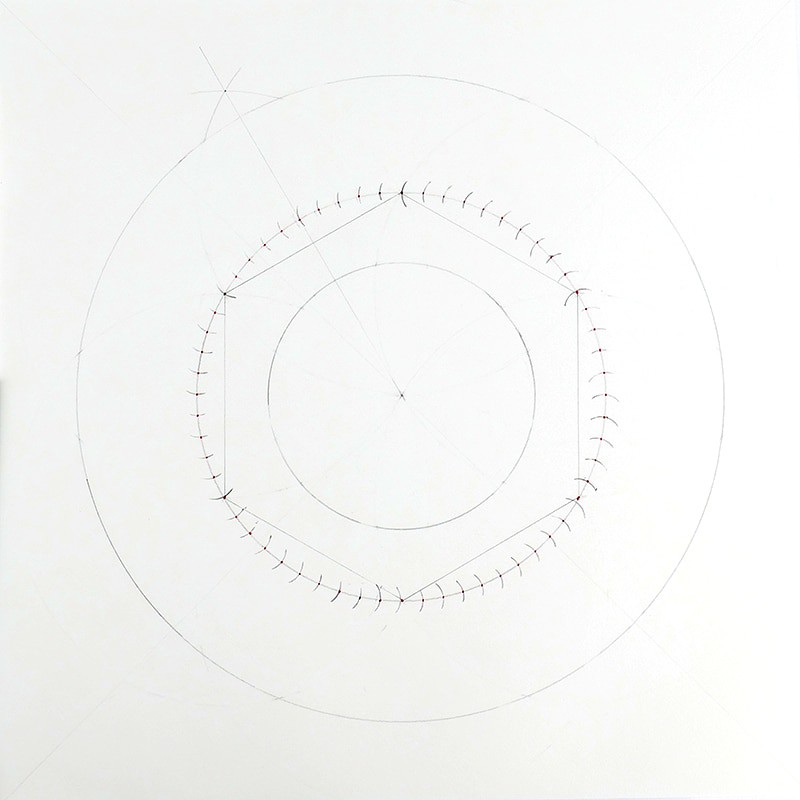 Make little red dots where the arcs cross the middle circle. There should be 60 dots. 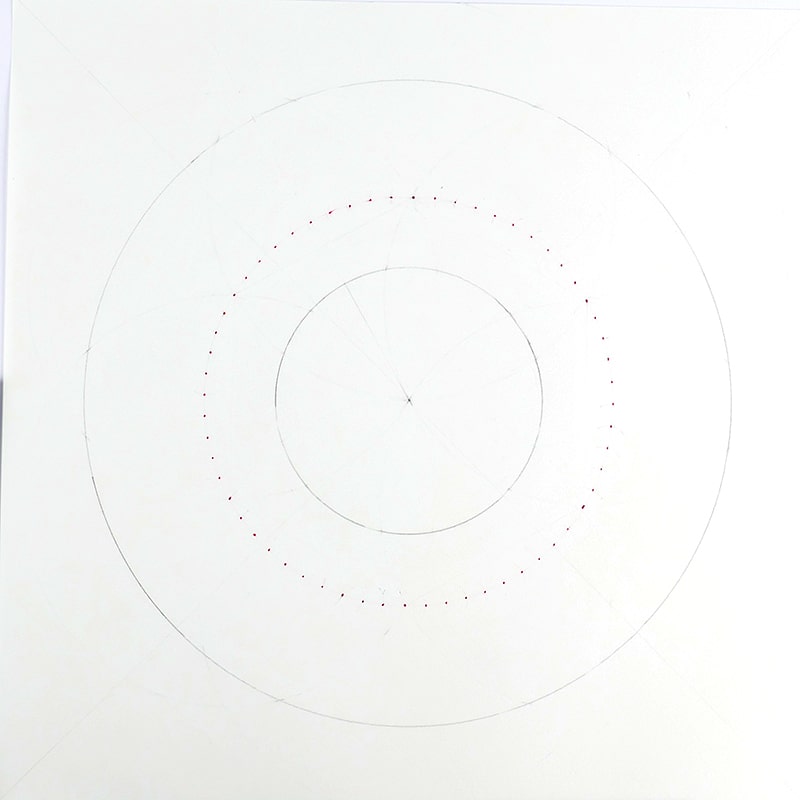 Let the ink dry for a minute then erase the unnecessary lines. Take a breath. You made it. Your are almost ready to begin drawing the grid lines. Notice how beautiful this feels. 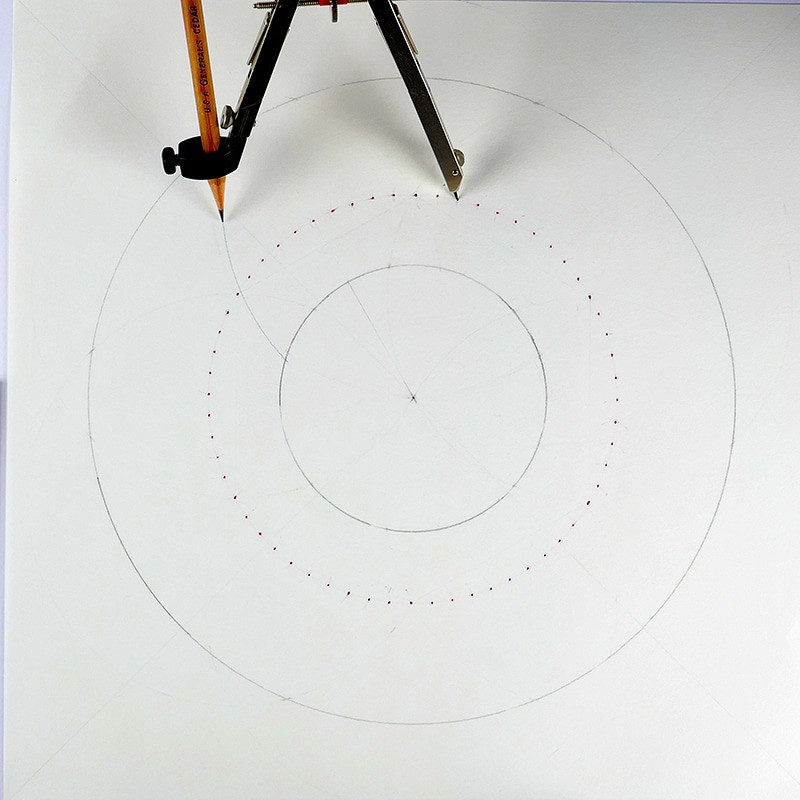 Find a radius that makes a nice arc from the center circle to the outer circle using one of the red dots as the center point. 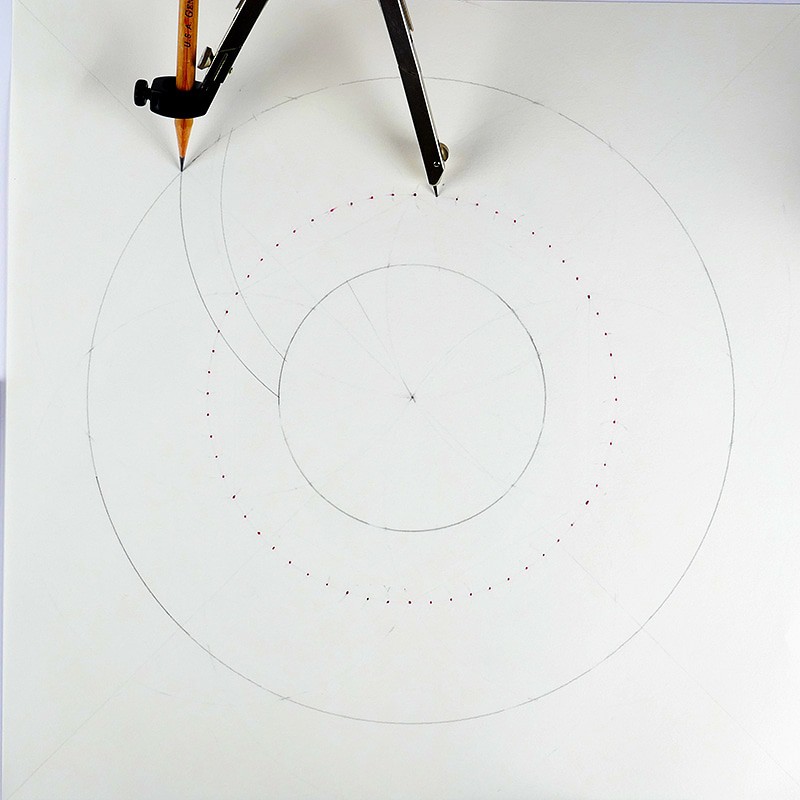 Either of these two arcs will work. 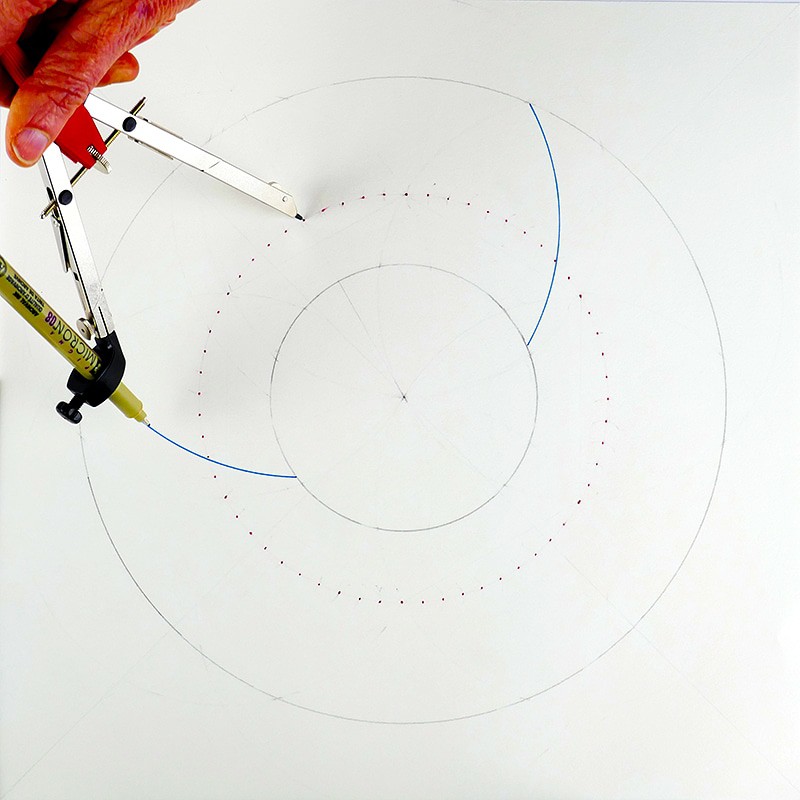 With the radius set, put a pen in the compass. Select your first red dot. You may want to mark it with a pencil. Arc on one side then the other. 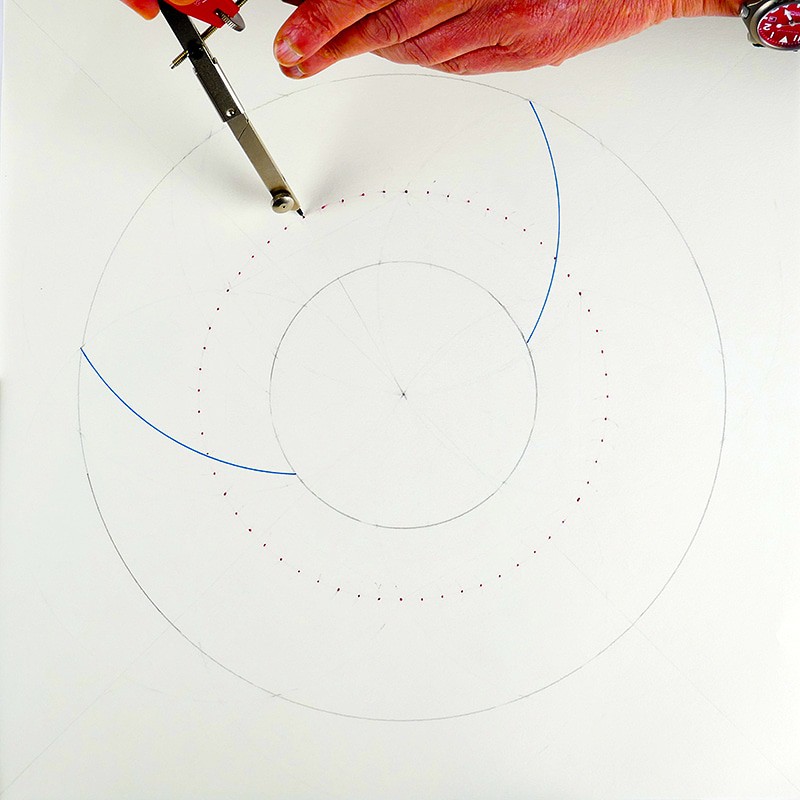 Then go to the next red dot. 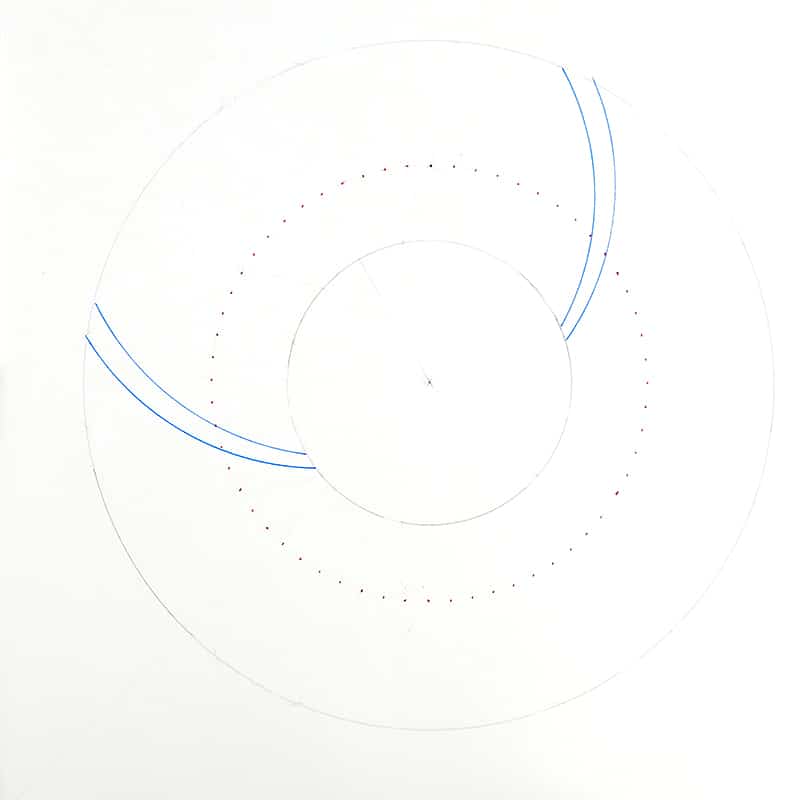 The second pair of arcs. 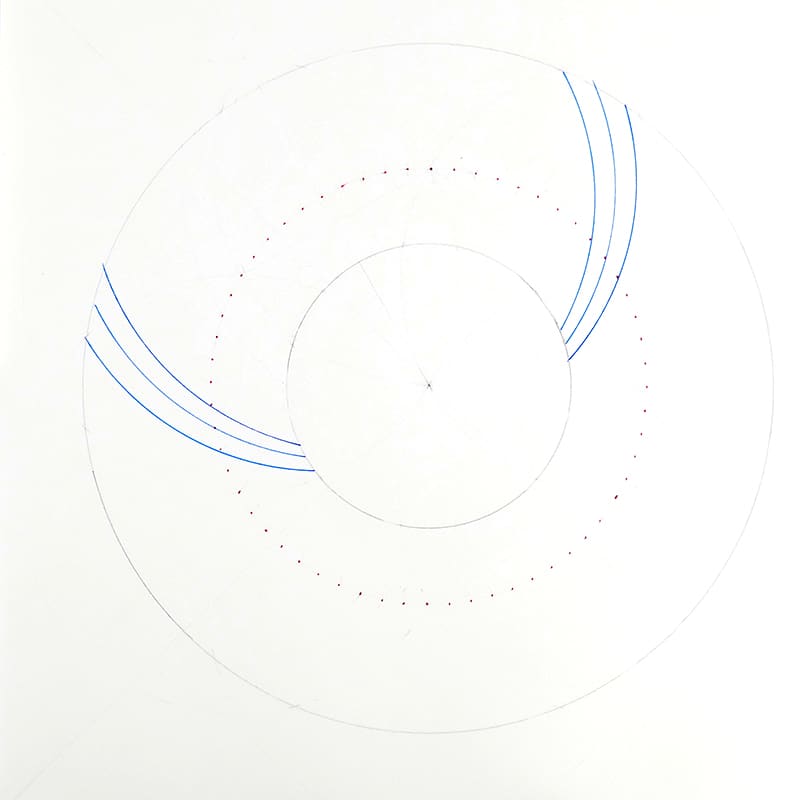 The third. Keep going until you have made two arcs at each compass point. 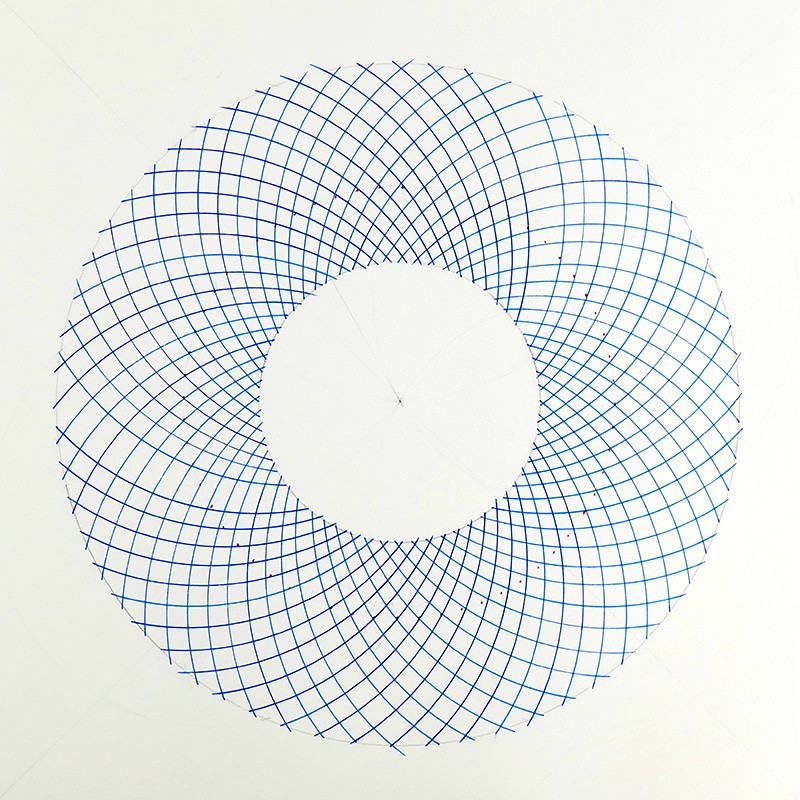 Fifty-nine pairs of arcs. One more pair to go.