It is impossible to draw a Fibonacci spiral, you can only draw a close approximation of one. As it is impossible to draw a 13-sided shape, you can only draw an approximation of one. So I set out this past week to draw a 13-armed Fibonnaci spiral. To do this I start with a 13-sided shape. Giuliana volunteered to draw the 13-sided shape and after several valiant attempts that came darn close, we got out the protractor. 360/13=27.69, and marked the degrees around the circle. I realized I wasn’t too clear in my last post about how I start the multi-armed spiral, so hopefully this post is better. In my web searches I also found I am not the only person confused on how to start the multi-armed spiral, and also that this is not the only way to do it. Maybe not even the best way to do it, but it’s how I do it. Here it goes: 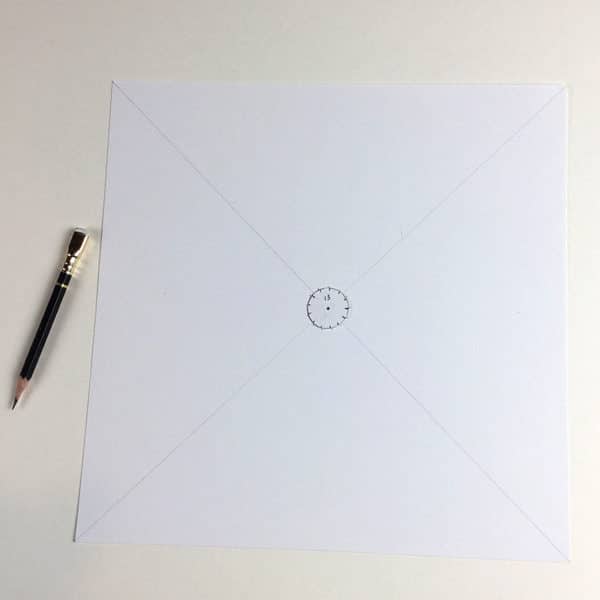 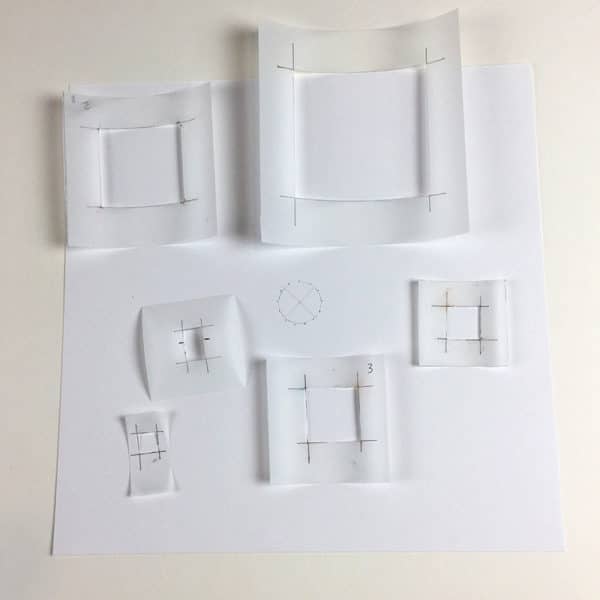 I cut out square stencils so I don't have to draw squares for every arc. I can line them up and mark where to put the compass point, and where to start and end the arc. Not drawing the full squares prevents having to erase a lot later. 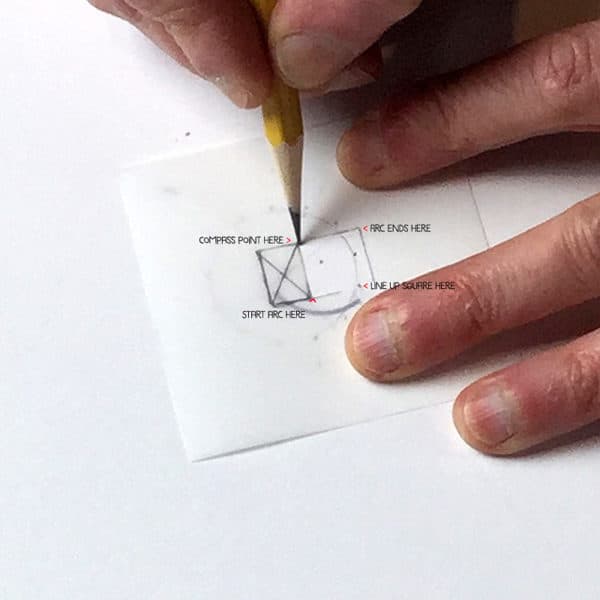 The cross in the golden rectangle lines up with the center of the circle. The edge of the square lines up with each of the 13 points on the circle, one at a time. Here I am setting up to draw my second line. 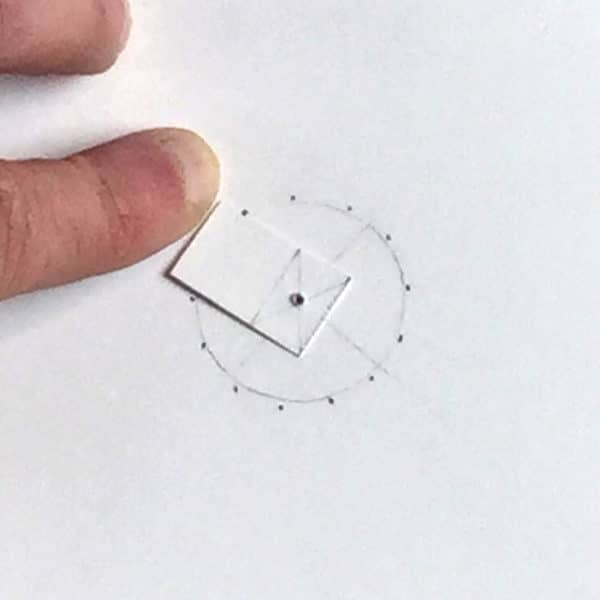 Or just use a paper cut out if you don't have stencil material. 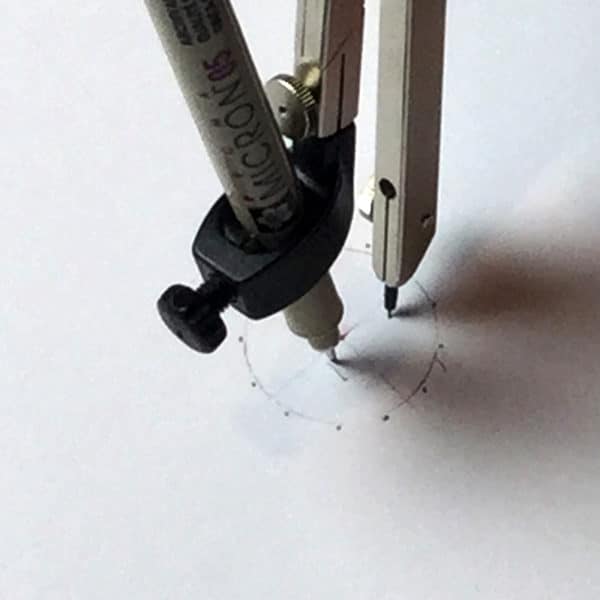 Making the first arc. You can see the pencil marks that describe where to start and end the arc. 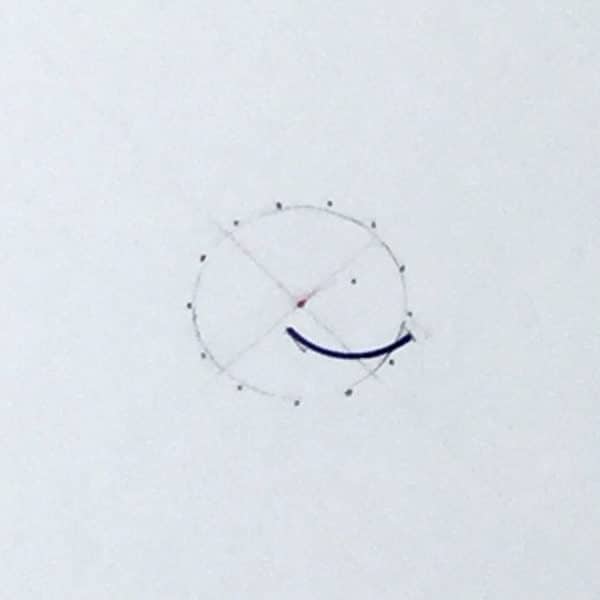 The first arc. You can see the dot marking the compass point and lines showing where to start and end the arc. 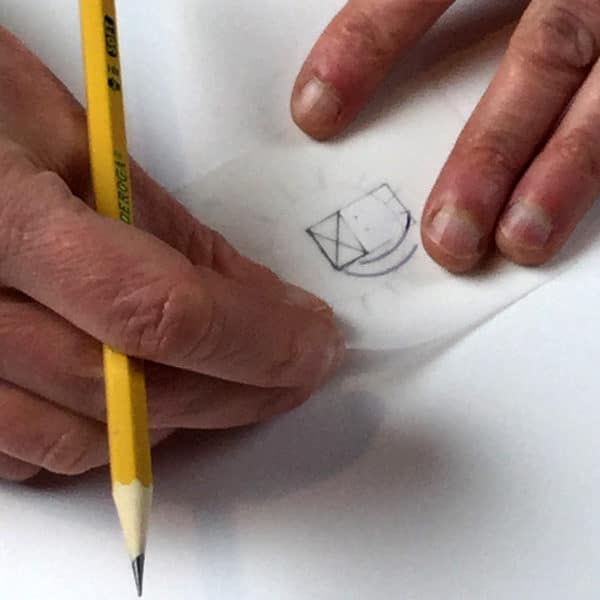 Lining up the stencil to mark the points for the next arc. 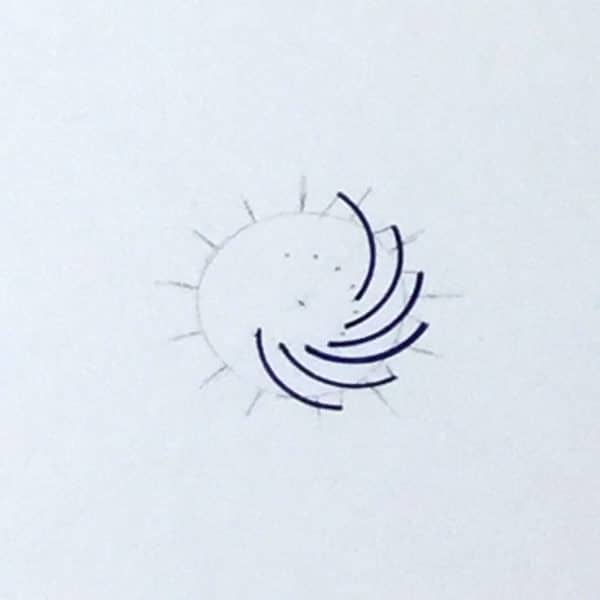 Here you can see the compass points are defining a circle as I go around making the arcs. Six down, seven to go. 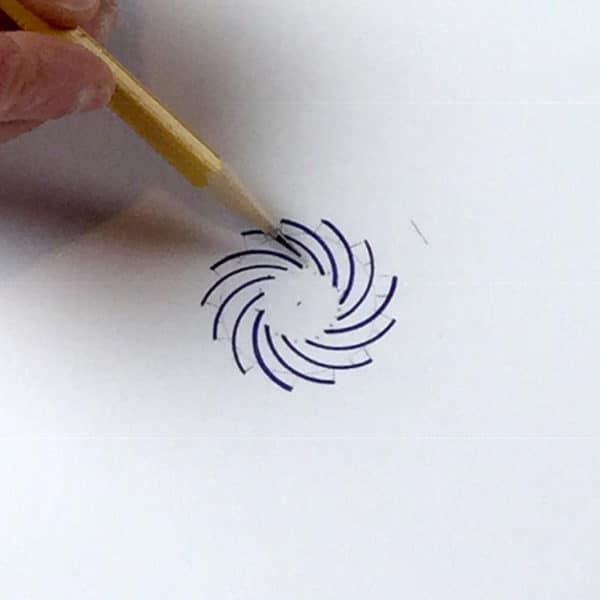 13 arcs round the circle evenly spaced. Maybe not perfect, but pretty good. 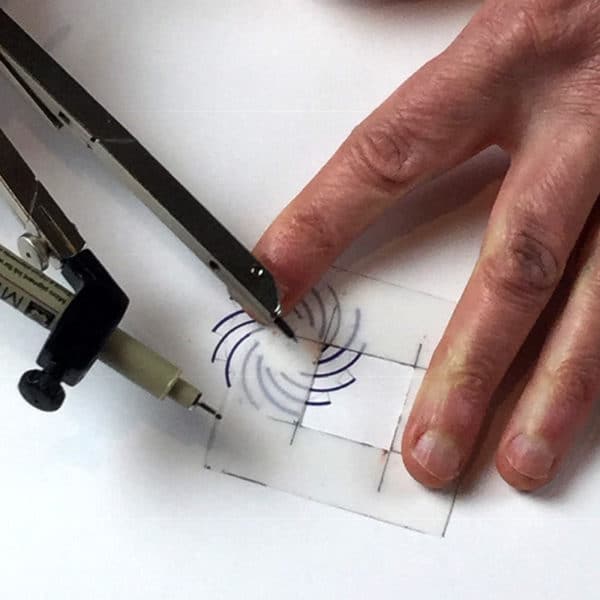 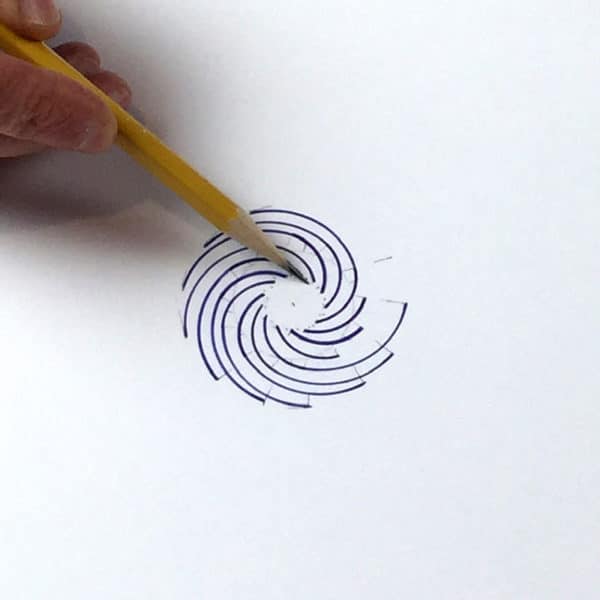 Second round of arcs in progress. 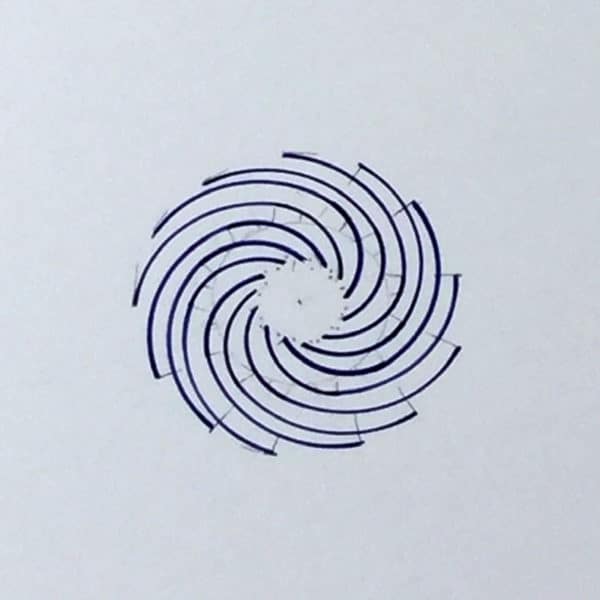 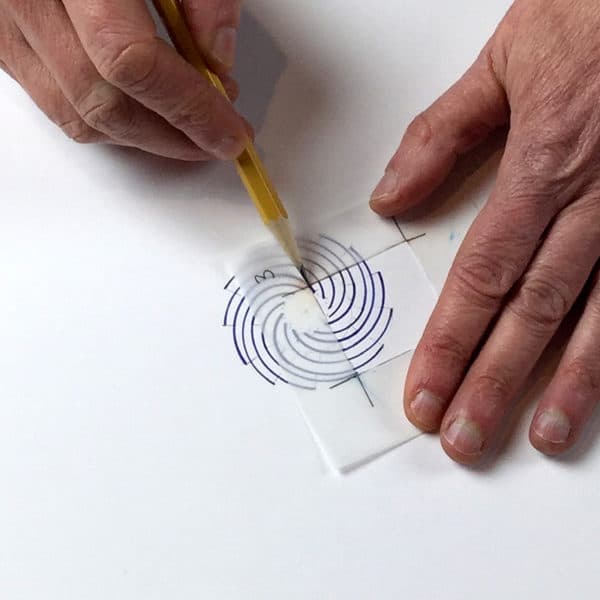 Lining up the number 3 stencil to do the first number 3 arc. 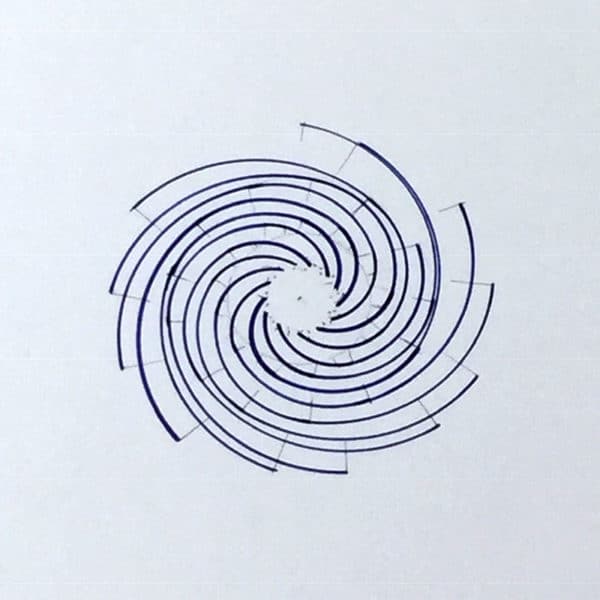 Looks like I messed up somewhere. I am not interested in making these perfect but I do aspire to better than this. I think I was too approximate when I lined up some of the square stencils. 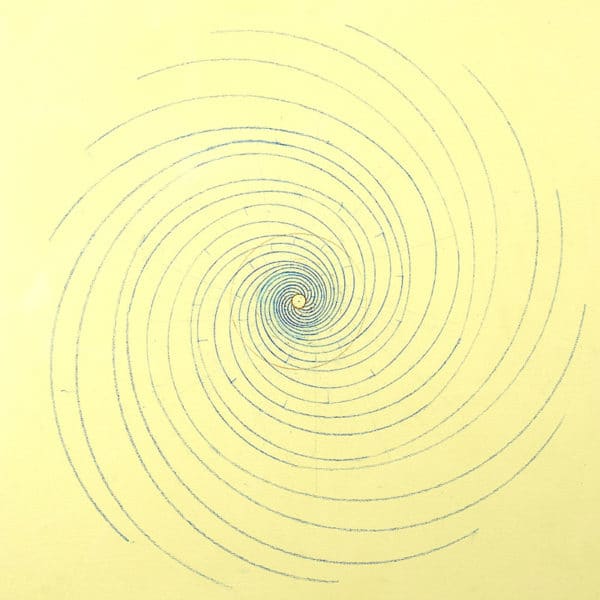 So I try it again with colored pencil so that I can erase if I have to. I didn't take photos as I was working so I could concentrate better. I realized that since the compass points line up in a circle I could just draw a circle and all my compass points should fall on it. 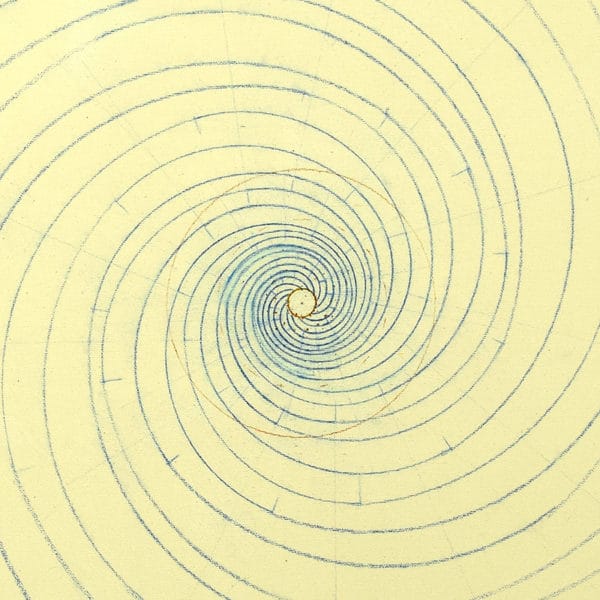 I sure am learning a lot by doing this. It was a big revelation when I realized I could just draw a circle to guide the compass points. Right in the middle of each arm was the place to point the compass. I could make my way around the circle leap frogging over each arm into the exact center between the lines and place my compass point there. Of course this only works when you have done the first couple of revolutions, otherwise everything is just too small.

← How to Draw Opposing Fibonacci SpiralsHarmonic Ratios →
Scroll To Top